Almost one percent of the world's population has vitiligo. In vitiligo, the cells that are responsible for skin color are destroyed. These cells, called melanocytes, no longer produce skin pigment, called melanin. Once the cells no longer produce melanin, areas of skin and hair will lose color or turn white. Even though vitiligo can affect many different parts of the body, it's not contagious. The exact cause of vitiligo is unknown however it does run in some families. It is considered as an autoimmune disease which is believed that normal pigment cells of the skin have been attacked.

There are various types of vitiligo depending upon the area involved such as focal, segmental, acral, mucosal, and generalized.

Studies shows that vitiligo can cause significant psychological effects. If you have vitiligo and are feeling any of these negative effects, talk to your doctor or someone who cares about you. It's also important to learn as much as you can about this disorder. This can help alleviate stress you may have about your condition or treatment options.

The exact cause is unknown however it does run in some families. It is thought as an "auto-immune" disease which is believed that normal pigment cells of the skin have been attacked. Vitiligo occurs most commonly on the tops of the hands and feet, around the ankles and wrists, over the elbows and knees, and around the eyes, mouth, nose and genitalia. In most patients, it is a life-long condition having periods of higher activity. 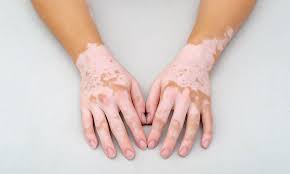